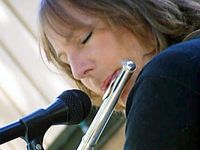 Mindy Canter's ability to play many styles and articulate with genuine mastery is the cornerstone of her appeal. Her blend of blues, jazz, funk, and soul is rhythmically infectious and widely acclaimed. It's rare to experience such a passionate, soulful performer, as she mixes musical genres with grace and ease.

Although classically trained, Mindy's earliest creative influences were Rhythm and Blues, Jazz, Funk, Rock, Roots... and anything else she could wrap her flute or keyboards around.

Mindy Canter is on the Advisory Board of Keep Music Rockin' In Schools, an organization supporting music programs through public school education, workshops, fundraising, and providing free instruments and instruction for students.

Mindy is also a mentor and advisor for PB and Jamm, an organization that brings mentors, advocacy, and inspiration to inner city kids.

Currently, Mindy Canter, "Fluteus Maximus," is in the studio, recording her next record.